JUST HOW SERIOUS IS THE RUSSIAN NUCLEAR THREAT?

The United States is asleep.  We assume that there is no need to fear that the Russians would ever contemplate, let alone conduct a first strike on the United States.  But quietly and steadily, the tension in Eastern Europe is escalating.  The possibility for a nuclear conflict – involving more than tactical nukes on the battlefield – has never loomed larger than right now.  Why would I say this?  Because Russia possesses enormous advantages.  And Russia has the motivations to use these weapons.  The issues are political, economic, and believe it or not, religious. 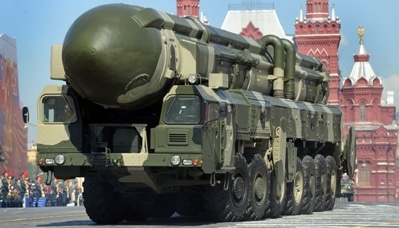 THE BEST DEFENSE, NOT OFFENSE, WINS A NUCLEAR WAR

The New Tactics of Global War

Just a few weeks ago, Russia made alarming allegations about NATO deploying a BDM in Romania, culminating in threats against NATO.  NATO’s move was seen as provocative.  Russia’s response was provocative too.  Despite U.S. claims that the BDM deployed was essential to protect Europe from a rogue Iranian launch of mid-range ballistic missiles, Russia saw the move as a direct threat to Moscow.  On the surface, such worries seem ridiculous – to Americans at least.

But Russians have a very different assumption about nuclear weapons.  We believe using them is unthinkable.  The Russians have always believed that their use in inevitable.  Thus, their comments and concerns can only mean one of two things:  Moscow feels threatened that the U.S. or NATO intends a first-strike against Russia (which they have felt in their bones was likely ever since the Cuban Missile Crisis of 1962), or they are themselves preparing for a surprise attack of their own on targets within NATO and the U.S.  The Russians obviously want no BDM in place that could lessen the effectiveness of their attack.  They understand that a better defense reduces the likelihood of success in conducting a first strike against the U.S.

I have asserted in several articles over the past year and in two books published during the past 9 months, that Russia intends to conduct a first strike on the U.S. in the near-term.  I base this in part based upon geopolitical assessment, conversations with experts in geopolitics, and my own analysis of Bible prophecy.  In two of my three most recent books, IS RUSSIA DESTINED TO DUKE THE U.S.? and THE NEXT GREAT WAR IN THE MIDDLE EAST, I set forth a case for why a nuclear attack stands out now as a real threat.

In a separate book for which I wrote the foreword, THE NEXT TACTICS OF GLOBAL WAR, authors Benjamin Baruch and Jeffrey (J.R.) Nyquist, laid out the strategic reasons behind such an attack, including detailed descriptions of the updated Russian nuclear weapons that make Russia a true threat and point out the extreme vulnerability of the United States.  Plus, they argue that the downfall of the Soviet Union was itself a false flag.  It’s often simply called The Perestroika Deception (from a book written by Soviet defector Anatoli Golitsyn).  In essence, the argument is that the fall of the Soviet Union was carried out to cause the U.S. to “let its guard down”.  Frankly, that is exactly what has happened.

Is the Perestroika Deception for Real?

Back to the BDM issue.  When one drills down into the issue of how many anti-ballistic missiles the U.S. has at its disposal to knock down Russia ballistic missiles (ICMS for Inter-continental Ballistic Missiles), according to expert J.R. Nyquist, the U.S. has about 5 to 6 dozen deployed in Alaska and California – and a few more in submarines scattered about.  In contrast, the Russians may have as many as 11,000 anti-ballistic missiles surrounding their vast country.  At best, we are outnumbered in defensive missiles by a mere 100 to 1.  If the point is not to start a nuclear war, but to survive one, Russia has 100 times better chance to survive such an attack than does the U.S.  This doesn’t count the rumored mammoth underground bunkers within the Russian countryside to protect thousands of their citizens.  The U.S. has the capability to protect only a few hundred (perhaps 1,000) persons, reserved for government officials.  But as bad as this sounds, things only get worse within the next 2 years.

IS RUSSIA DESTINED TO NUKE THE U.S.?

The Russians will deploy the S-500 BDM system.  The S-500 (successor obviously to the S-300 sold recently to Iran and the S-400 deployed and used in Syria to protect Russian fighter bombers after Turkey downed one of their aircraft in November 2015), is not just an ABM that employs nuclear technology (such as an EMP detonation) to explode in outer space destroying incoming multiple ICBMs simultaneously from NATO or the U.S.), the missiles fired by the S-500 can also be OFFENSIVE weapons.  Once the S-500 is fully deployed, the entire Russian perimeter will be protected by these sophisticated nuclear defensive AND OFFENSIVE weapons.  The nuclear arms limitations treaties (e.g., START signed in 2010) don’t count such “dual purpose missiles”.  And ABM treaties are no longer in effect.  Russia has a free hand to build as many weapons as they want, claiming them to be defensive, but actually creating massive “overkill” in both missiles and warheads.

The START treaty intended to put an end to the multiplication of missiles containing multiple warheads, each with the ability to find their own targets independently, the so-called MIRV (multiple independently targetable re-entry vehicles).  The U.S. seems to have complied.  But have the Russians?  Our scientists seem optimistic that the Russians can be trusted and that they are in full compliance.  A sample of such goodwill is found in this passage:

The United States last week finished removing the last MIRV (multiple independently targetable reentry vehicle) from its Minuteman 3 intercontinental ballistic missiles (ICBMs); these missiles will now each carry a single warhead. The move was the fulfillment of a promise the Obama administration made in its 2010 Nuclear Posture Review, which stated that it would “enhance the stability of the nuclear balance by reducing the incentives for either side to strike first.”

It is also another step toward compliance with the New START treaty, under the terms of which the United States and Russia will each reduce the number of their deployed strategic warheads to 1,550 by 2018 (Russia is already below this number, the U.S. is still working on it). [ 1 ]

Troops are building up on the border between Russia and Eastern European states.  But this is only the top line of extensive and deep challenges facing Germany, the European Union, Russia, and the Ukraine which serves as the baby about to be sawn in half.

In several articles over the past six months or so, George Friedman of Geopolitical Futuresindicates that there exists a major chess match occurring right now between the U.S./NATO and Russia.  Russia is doing its best to split up the alliance between Germany and the U.S.   Germany would prefer to end the sanctions between Russia and the E.U.  The U.S. wants to continue exerting pressure on Russia despite Russian assistance in the fight against ISIS in Syria (the U.S. was at best double-minded about who they really wanted to win in Syria).  Analyst Lily Bayer of Geopolitical Futures comments:

Moscow is employing a dual negotiating tactic. It is seeking to show foreign governments that it remains a credible military threat when it comes to Ukraine. But Russian officials are also working to appear conciliatory and have shown a willingness to aid Western powers when it comes to issues like Syria. The ultimate aim of this tactic is to create a split within the West over its approach to Russia, while also incentivizing Western governments to provide concessions on key areas, like the future status of Ukraine. [ 2 ]

Angela Merkel, the Chancellor of Germany, is actually quite friendly with Vladimir Putin, President of Russia. The two would prefer to let by-gones be by-gones.  Germany has bigger issues to address. Economically, Germany faces a crisis.  It’s a major exporter nation with a big trade surplus that creates its own set of monetary issue.  [Anyone who drives a BMW or a Mercedes (I once did… but can’t afford one anymore!) knows all about buying a foreign import from Bavaria].   But hard times outside of Germany have dampened the market for such expensive motor cars.  Of course, German technological exports go beyond building great cars.  They have their own military-industrial complex. Regardless of any particular set of products, Germany must address the challenge to continue stoking the fire of growth from external markets.  Meanwhile, Russia is an exporter of minerals – namely oil and gas.  Europe needs Russian fossil fuels.  Russia needs to sell their oil and gas to Europe.  But there are other issues than just economic “marks and rubles”.

Germany basically trusts Russia and the feeling seems to be mutual.  The problem is that the English and the Americans get in the way.  (The French usually go whichever way the wind is blowing strongest).  However, the eastern states in Europe, the Baltics in the North and the Balkans in the South aren’t so confident that the Russians can be trusted.  The Poles and the Czechs have vivid memories of Russian tanks clamoring into Warsaw and Prague.  Estonia, Latvia, and the Lithuania are on edge right now.   And the Balkans have no illusion about Russian designs on their territories.  Several hundred years of tug-of-war between Russia and “Greater Germany” (the Austro-Hungarian Empire plus the Prussians) have taught them that sovereignty can’t be taken for granted.

Until recently, Berlin and Washington largely agreed on how to respond to Russian aggression in Ukraine. Both countries pushed for sanctions and boosting NATO’s defenses, especially in Poland and the Baltic states. At the same time, both were committed to politically and financially supporting Kiev’s Western-oriented government.

But as we outlined last week, the German position is shifting. Faced with a referendum on whether Britain will leave the EU on June 23, banking troubles in southern Europe, and its own economic woes in the form of an export crisis, Berlin is looking for ways to ease tensions with Moscow. [ 3 ]

Bayer argues in part (inconsistently in my view) that the the U.S. is more eager than Germany to find a solution and negotiate.  And she concludes her article with these words:

Therefore, Russia is moving some troops to its western borders to remind the West that Moscow can pose a threat to the region and thus improve its position in negotiations with the U.S. However, Moscow is opting to limit the size of these deployments and remain ambiguous about their status in order to avoid derailing its rapprochement with Germany and prospects for an easing of European sanctions.

In Geopolitical Futures’ forecast for 2016, we wrote that there will be a settlement in Ukraine, whether formal or informal. At this stage, as a delicate game of deployments, denials, military coordination and never-ending rounds of diplomatic summits plays out, Russia is aiming to undermine the cohesion of the West and ultimately come to an agreement that would ensure the neutrality of Ukraine.  [ 4 ]

The outcome of this is a long way from becoming clear.  But what is obvious is that there is no conciliation between the competing parties, no “let’s just get along”.  Diplomacy has been much less pronounced than saber rattling.  If one takes the long-term strategic view, and believes that there are reasons that war between Russia and the U.S./Britain (more specifically the brunt of Moscow’s ire than the E.U in general), it’s not comforting to see more and more troops amassing on the borders between Russia and Europe, nor the talk that is transpiring reaching higher and higher decibel levels.