When you really need to drive at night, bugout at night, search at night or protect from intruders at night. Nothing beats night vision.

The NVD Binocular/Monocular Night Vision Device (BMNVD) is a revolutionary new concept which combines all the best features of a monocular and binocular device into one fully functional night vision product.

Prior to the BMNVD, most bridge type designs attempted to combine two independent monocular systems into a bridge in order to make them into a binocular. This required the use of two fully functioning monocular systems such as two PVS-14s. Although this concept worked, there are drawbacks to this method, some of which are serious. These include an inability to collimate the binocular system and being extremely heavy due to the redundancy of having dual batteries, circuit boards and large amounts of plastic housing material which is required by each monocular, but would otherwise be unneeded in a true binocular design.

The BMNVD overcomes these issues by attaching two monocular housings to the bridge. These m 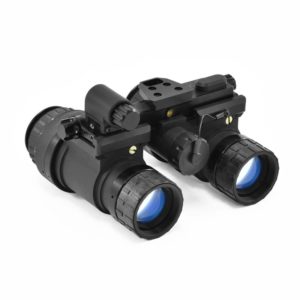 onoculars then draw all power directly from the bridge. When a monocular is needed to be used individually, you simply press a button, slide the monocular off the bridge, and then slide the power pack onto the monocular housing, which converts the monocular housing into a fully functional standalone night vision monocular which can be hand held, head, helmet, or weapon mounted, using the same adapters and mounts as the AN/PVS-14. The dis-assembly and reassembly process from Binocular to monocular can be completed in less than one minute.

The BMNVD also utilizes MIL SPEC AN/PVS-14 optics and accessories, which make for a truly affordable high quality system, and two PVS-14s can be easily converted into a BMNVD, which will allow the 14s to still be utilized for every application which the AN/PVS-14 is used for now, and will also allow them to be used as a true dual tube goggle, which is light weight, fully collimated and nitrogen purged. The BMNVD product line also runs on a CR-123 battery which delivers more than 40 hours of use.

It is unlawful to export, or attempt to export or otherwise transfer or sell any hardware or technical data or furnish any service to any foreign person, whether abroad or in the United States, for which a license or written approval of the U.S. Government is required, without first obtaining the required license or written approval from the Department of the U.S. Government having jurisdiction.

It is the Resellers/End Users responsibility to request and obtain export licenses for the export of the subject items, and to ensure that the requirements of all applicable laws, regulations and administrative policies are met. Sales or transfers to entities on the List of Debarred Parties, Denied Persons list and Embargoed Countries are strictly prohibited.