Counter Assault bear spray is designed to drive away bears in the event of an attack and this larger size ensures you’ll have plenty for reserve. Not for personal use.

Please Note: This product is not able to be shipped to the state of Wisconsin or Massachusetts. Made in USA.

One of a Kind Bear Spray 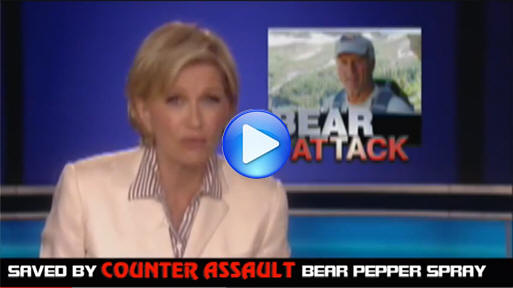 Produced by a Grizzly Encounter Survivor
Counter Assault was developed in conjunction with a research study at the University of Montana that included bear biologists and then was extensively  field tested by wildlife management specialists.  During the development stages, Counter Assault carefully listened to wildlife management specialists, outfitters and individuals that were involved in bear encounters.

During the original testing, recommendations were established based on their experiences with black and grizzly bears. Testing was performed on extremely agitated bears that were removed from our parks and forests for being too aggressive. Counter Assault has continued to monitor the suggestions and recommendations from bear experts who work for our state and federal agencies and have reaffirmed these recommendations over the past 20+ years.

Bear Deterrent Recommendations from the US Environmental Protection Agency 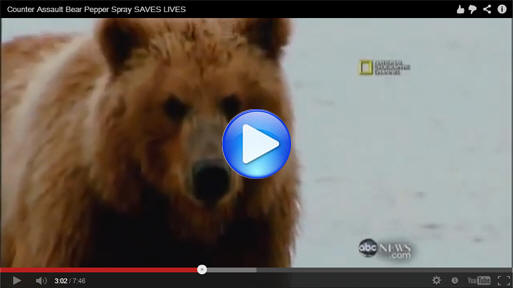 “The darn stuff proved to be almost amazing.   I carry the spray and think it could be a lifesaver.”
Dr. Stephen Herrero, University of Calgary; author of “Bear Attacks: Their Causes and Avoidance”.

“Counter Assault bear spray has been in use for a long time and has the best record for confirmed cases of stopping attacking bears.  I highly recommend this product”  – James (Gary) Sheldon – British Columbia bear expert and author of “Bear Encounter Survival Guide” and “Bear Attacks, The Deadly Truth”.

“One alternative (to firearms) that’s gaining notoriety is to carry a holster of bear  deterrent.  The leading brand on the market – Counter Assault.“ – Tod Wilkinson – Backpacker Magazine

“The product is appealing to me because it is lightweight, easy to use, controllable, and most importantly, not lethal to the animal.  For these reasons I will continue to have Counter Assault on hand during my excursions into the wilderness areas of North America.“  – John Blaser, NY State Guide, Tuckahoe, NY.

“I too was a bit skeptical of how effective Counter Assault would be in repelling an aggressive bear, at first.  But now that I have used it twice, both times with excellent results, it has become a permanent tool I carry on all excursions into the bush.“ – John Hyde, VIS, State of Alaska Department of Fish and Game.

“Without a doubt the spray saved us  from bodily harm.  In my opinion it’s better to carry the spray than a handgun in bear country.  Everyone who hikes, camps, hunts, or photographs in bear country should consider Counter Assault as required equipment.”   – Michael Francis, Wildlife Photographer, Billings, Montana.

“If I hadn’t been carrying that can of Counter Assault one or more of us would have been seriously injured or possibly killed.”  – Terry Domico, Writer/Photographer & Natural History Specialist, Bainbridge Island, Washington.

“Most recently used the last of my canister to remove a pit bull who was firmly attached to my ankle.  Nothing else available works as effectively or with the broad spraying range as Counter Assault.“ – S. Craig Mitchell, Anchorage, Alaska. 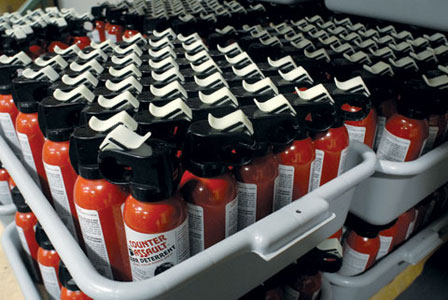