The Ghillie Suit, originally developed by Scottish gamekeepers as a sort of portable hunting blind, was first adapted for military use by the Lovat Scouts. Lovat Scouts were a Scottish Highland regiment of the British Royal Army in 1916, who eventually formed the first sniper unit of the British Army. Over the last hundred years, the ghillie suit has been adopted as a staple of sniper units, providing concealment on the battlefield to avoid being targeted by enemy forces.

Generally, a military sniper will construct their own ghillie suit by using a standard camouflage uniform as a base. They’ll then add some netting, strips of burlap, jute and twine, which are all color matched to the operating environment they need to blend into. In the field, local vegetation is often attached to the netting and refreshed periodically to closely match the surrounding flora and terrain. 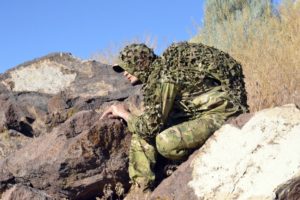 The process of building a ghillie suit is a slow one and the resulting garment is often quite heavy. They’re not made for comfort or ease of transport, but rather to disguise the presence of a shooter in a given environment. The fieldcraft used to construct ghillie suits is taught in military sniper schools and honed through experience.

In 2011, I got my first taste of building a ghillie during a sniper school I attended. During this class, I managed to build roughly 10% of a functional cover. Upon returning home, I followed through with the completion of a full ghillie suit, building off a Cobra Hood purchased from Tactical Concealment. In the end, it probably took me about a month and a half to finish, working for a couple hours a day.

In addition to the laborious tying of burlap, jute and twine to the netting, I also modified a set of nylon-cotton BDUs to add 1000 denier Cordura to the front of the pants and blouse, taking it all the way up to where the name tapes were mounted. I removed the pockets from the front of the blouse and added them, inverted, to the bottom of the sleeves; such that small items could be stored and retrieved while in the prone position without much movement, aside from the forearms.

In the end, the finished suit weighs about 28 pounds and though I’ll probably never actually have a need for it, I gained immense satisfaction from finishing the project. Sadly, my wife prefers I store it in a Pelican case, rather than displaying it in the living room, as she claims it’s “crazy looking” and “stinks.”

To be fair, it does actually smell like a combination of sweat, burlap and spray paint, which isn’t surprising, considering how it’s made up of all three.

The benefits of proper concealment from a tactical standpoint are likely obvious to anyone who reads the articles here on ITS. At this past year’s Muster, John Hurth of TYR Group instructed the attendees on the basics of concealment and constructing our own field-expedient ghillie covers. It was a good refresher on the fieldcraft basics of concealment and it immediately made me think of an item I wished I’d packed, the Crye Precision Compact Assault Ghillie. 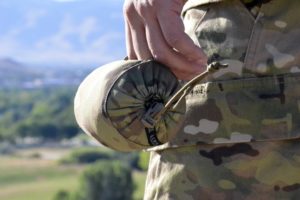 In 2012, Crye Precision, the creators of the MultiCam camouflage pattern (as well as the various newer MultiCam variants) released what they call the Compact Assault Ghillie. The basic purpose of this garment was to provide a highly portable, easily packed concealment garment for use by people other than snipers.

I bought mine within a month of their release, thinking it was a pretty cool piece of kit, even if I never found a use for it. Surprisingly, I’ve managed to find a couple of uses for it and hope I’ll continue to in the future.

The Compact Assault Ghillie packs down into a MultiCam pouch slightly larger than a baseball. Shock cord keeps it compact, enabling the user to stuff it into a pack and even attach it to a belt or MOLLE loops for ease of retrieval.

To deploy it, simply pull it out of the pouch, find the arm holes and head opening, put it on and drape the long section over your back or pack. The hood can be raised or lowered and is ample enough to fit over a boonie, ball cap, or even an Ops-Core helmet. The sleeves are slightly shorter than BDU sleeves and don’t impede normal movement at all.

The Compact Assault Ghillie is constructed of a polyester mesh lining with a nylon MultiCam shell, laser-cut into three-dimensional shapes, which break up the MultiCam pattern even more. The length in the back covers even a substantial pack and a portion of the tail can be removed to drape it over a weapon or observation equipment.

It isn’t as efficient in providing concealment as a fully constructed ghillie suit would be, but it isn’t meant to be. It’s intended more to provide portable concealment rather than perfect concealment.

The CAG does manage to break up the solid outline of a human, particularly if they stay low to the ground or use terrain features to obscure the bulk of their form. The greater the distance, the more effective it is. It’s also geared specifically toward environments where MultiCam has already been proven to work. It can be augmented with environment-specific foliage, but works well enough on its own for most temporary situations in which basic concealment is an advantage.

It has a distinct heat dissipation advantage over a traditional ghillie. Since it’s made of extremely lightweight material with a porous mesh understructure, air still circulates easily through to the wearer’s skin. Compare this to a traditional ghillie suit, which is roughly akin to donning a heavy, smelly and itchy portable sauna. The laser-cut outer shell, which provides the actual break-up of the wearer’s outline, is somewhat prone to catching on things in any given natural environment, but the construction is sturdy enough that’s it’s not a major problem.

Due to its compact size and lack of weight, the CAG has become part of my bolt bag, but not so much for reasons of wearing it in a disaster situation. Keeping it in my bolt bag allows it to be wrapped around a stash of supplies I might return to later. The CAG reduces the likelihood someone else will see it and “re-appropriate” my supplies.

To test this, I managed to secret away a MultiCam GORUCK GR1 in Golden Gate Park, covered by the Compact Assault Ghillie, a few feet away from a foot path in the base of some rather thick foliage. I observed from a distance of about 50 yards for about 2 hours and saw plenty of people walk right by it.

No one seemed to give it a second look, aside from a single dog who seemed interested. I retrieved it after a couple of hours without incident. I feel confident that had I hidden it even better, it could have remained there for even longer.

In legitimate battlefield use, the Compact Assault Ghillie isn’t intended to be a full-fledged replacement for the traditional ghillie suit employed by sniper units. It simply isn’t as effective as the traditional ghillie, but at the same time, it does provide more concealment than a camouflage uniform and earth-tone helmet.

The target users of the Compact Assault Ghillie would be designated marksmen or other dismounted light infantry personnel who could benefit from a lightweight, easily deployed and easily re-stashed method of breaking up their outline in an environment where concealment provides some tactical advantage.

In some ways, the CAG is similar to the Israeli Mitznefet helmet covers, which serve to make it more difficult for the enemy to distinguish the shape of the IDF helmet at a distance. The CAG provides this same concealment to the head, but also to the shoulders, back and if used properly, even a long gun. Both devices bring similar functionality, including the advantage of being easily stored when not in use, without taking up too much space or weight.

If Uncle Sam isn’t springing for your gear and you find the price a little too high, you could always construct your own portable concealment garment with some camouflage netting, spray paint, a little burlap and other fibers to get pretty much the same level of portable concealment at a fraction of the cost. 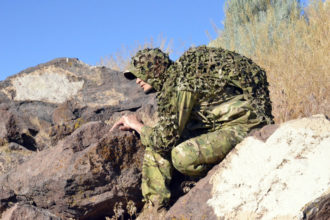