Guns are mechanical machines. Machines that are designed and crafted by human hands, so we know they can fail, they can break and they can malfunction. Regardless of how well a handgun is built, and how carefully ammunition is loaded, there is always a chance of having to fix one of these 4 handgun malfunctions.

The vast majority of us who carry a weapon for self-defense rely on a handgun. A handgun is the great equalizer between men and women of all sizes, ages, and strength. When depending on a handgun to protect your life, liberty and property it’s important to realize it can fail. Understanding your weapon can fail is important, but what is more important is that when your weapon fails you know how to deal with it. 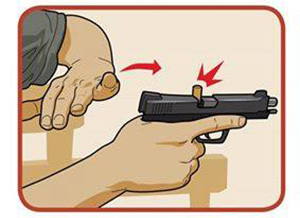 A failure to eject, also known as a stovepipe, is when the case from the round completely fails to eject. This causes the case to become stuck between the slide and the chamber. The appearance is that the gun has a chimney, or stovepipe sticking out from the top. This also typically causes the next round in the magazine to partially load. 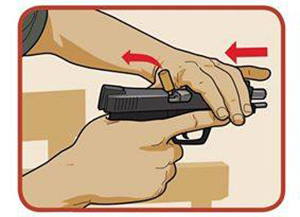 This is a complicated issue because you have both a live round partially in the chamber and a case sticking out the top. To effectively clear this malfunction, you need to eject, but stow the magazine and pull the slide to the rear. This will clear the case and potential live round. You can lock the slide the rear, but this may take some time in a gunfight unless you are an expert. Next put the magazine back in the weapon, rack it and engage. This is another issue that does not affect revolvers.

Your basic handgun malfunction is a failure to fire; this can be caused by a variety of different factors. On your firearms side you may have a broken or shortened firing pin. However, if you use a quality weapon this is highly unlikely. This is most typically an ammunition issue. There can also be a combination of failure on your gun and ammo. Some surplus ammunition from Eastern Europe tends to have a hard primer, and your firing pin may not be long and strong enough to ignite. This is another extremely rare malfunction.

The Fix – On the Range

On the range you have the luxury of time, and patience. When attempting to fix this malfunction on a square range you should account for what is known as a hang fire. A hang fire is the delay in the powder igniting. In a hang fire the powder can eventually ignite. Allow 15 to 20 seconds to pass with the weapon pointed down range in a safe manner. On a semi-automatic handgun simply pull the slide to the rear and allow the round to extract, and eject. On a revolver simply squeeze the trigger again and take note of the round when you reload.

The Fix – In a self defense Scenario

In a self-defense, or when training for a self-defense scenario you don’t have time to wait for a hang fire. The risk of an injury from a hang fire should the round detonate outside your weapon is minimal. The projectile will not be propelled any distance. On an automatic pull the slide to the rear and eject the round, and on a revolver just pull the trigger again.

The squid load is by far the worst handgun malfunction you can have. It’s also by far one of the rarest. They normally occur with reloaded ammunition, and happen very rarely with reloaded ammunition. A squib load happens when the actual projectile did not have enough force to leave the barrel. The projectile becomes stuck in the barrel. If you ignore the warning signs, and fire again you could damage the weapon, and harm yourself in the process. If another projectile going at full speed hits the squib projectile you can imagine the consequences are not pretty. Luckily, a squib load is easy to spot. They are characterized by reduced recoil, a quieter sounding shot, and decreased muzzle flash and climb. If you feel something out of the ordinary, there is good reason to believe something is wrong.

Unfortunately, if this happens in a gunfight you are down a weapon. This isn’t something that can be fixed quickly, unless you carry a cleaning rod with you at all times. If you get a squib you should clear the weapon, locked the slide to the rear with an automatic, and with a revolver open the cylinder. Do not look down your barrel, but you can attempt to look through from the chamber side, IE the side bullet DO NOT come out. Insert a cleaning rod or dowel of some kind down the bore and attempt to simply press the obstruction out.

A failure feed occurs when the round fails to properly feed from the magazine to the chamber. This can be caused by ammunition length being out of spec, magazine problems, and due to user error. Out of spec ammunition is extremely rare when using factory loads, and is more common with reloads. Magazine problems are common, but when they tend to happen they happen over and over. This means a problem magazine that should be replaced. User error can occur when the user does not properly hold the weapon, and is known as limp wristing. When you have a failure to feed the slide on an automatic has not gone fully into battery, making the weapon incapable of firing. A failure to feed can also cause the round to sit at an odd angle.

Failure to feeds come in many different varieties, and when the bullet angles a specific way the scenario can be changed entirely. With some failures to feed the user can simply pull the slide to rear and eject the round. With others this may cause a double feed. In a gunfight you don’t have much time to distinguish what kind of failure to feed you have. The safest method is to eject the magazine, retain it, and pull the slide to rear. This will cause the failure to drop. The shooter can then reload and engage. This issue does not affect revolvers. 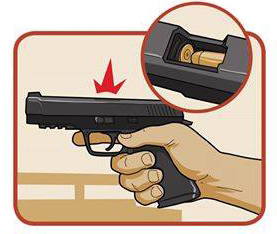 You have a double feed when two live rounds attempt to feed into the chamber at the same time. If you use quality gear and take good care of it, then you should not be seeing many double feeds. But if you do have many double feeds and you can’t find a gun malfunction, then maybe you should change your gun.

To fix a double feed, first remove the magazine. 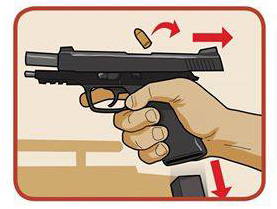 Then, rack the slide to eject both rounds. Once both rounds are ejected, insert a fresh magazine.

These are the most common handgun malfunctions you can experience. Of course there are also malfunctions caused by guns breaking, but there isn’t much you can do about that to immediately remedy it. If you are serious regarding self-defense I suggest buying some dummy ammo, like Snap Caps, and practice remedying these malfunctions at home. Turn them into muscle memory to prepare yourself in case they happen in a self-defense encounter. Always remember to train, but train safe.