This article was written by Paul Joseph Watson and originally published at Infowars.com. 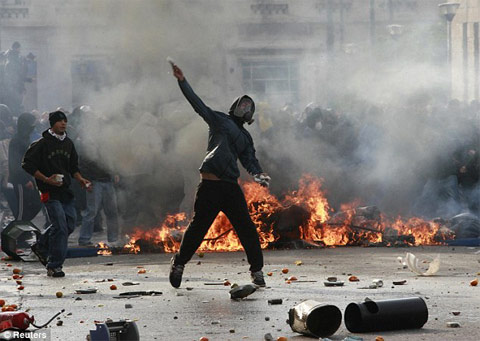 Editor’s Comment: We’ve all known this has been building, but now some very high ranking insiders are admitting the extent to which the system is corrupt, rigged, and poised for collapse. Something is coming, but who could really know when?

Whether it happens on our watch or not, it would be wise and prudent to be prepared, personally, and at a society level for misfortune and drastic change in the power structure, the services we expect and are accustomed to, and the establishment system at large. It is no surprise that those with means are getting out while they still can.

Lloyds commissioned leading global risk management consultancy the Risk Advisory Group to produce a report analyzing what factors could prompt the spread of civil unrest around the world.

The report found that, “Instances of political violence contagion are becoming more frequent and the contagion effect ever more rapid and powerful,” with head of exposure management and reinsurance, Trevor Maynard, warning that global outbreaks of violence are increasingly likely to develop into “pandemics” of civil unrest.

This transformation will lead to “widespread disruption yet prove extremely difficult to anticipate,” and threaten “international stability,” according to the report.

The inquiry found that the potential for mass civil unrest represents a “highly important dimension of political risk” and that preparations for such scenarios are currently insufficient.

As we have recently highlighted, the ultra-wealthy are highly concerned about civil unrest and have made moves to prepare for social disorder.

Elitists are buying luxury bomb-proof survival bunkers, with one of the companies behind the underground units, Vivos, revealing that they are for the “protection of high net worth individuals” against the threat posed by the “general public”.

“This is for wealthy people who are concerned about various disaster scenarios, but a common theme among them is a fear of civil unrest, a fear of an uprising from the 99%,” said journalist Lynn Parramore, who visited one of the facilities in Indiana.

Millionaires are fleeing Chicago and other major cities due to concerns over racial tensions and rising crime rates.

“About 3,000 individuals with net assets of $1 million or more,” left Chicago in just the last year alone according to the Chicago Tribune.

Paris and Rome are also seeing a mass exodus of millionaires, while wealthy elites are alsoinstalling panic rooms in their big city apartments due to fears over potential civil unrest and skyrocketing crime.

Land and remote homes in places like New Zealand are also popular with the global 1%, with realtors citing the threat of worldwide financial instability and domestic disorder as motivating factors behind the purchases.