Its Probably A Good Time To Get Your AR-15 Now… 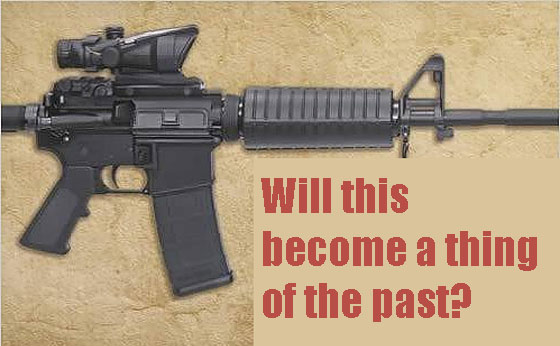 If you have been thinking about getting one, now is probably a good time to acquire your AR-15…before the gun-grabbers implement a ban by either some sort of ‘executive order’ or some other method.

Additionally, ‘if’ Hillary wins the election, you can almost guarantee that the following things will hinder or eliminate your ability to acquire one:

1. There will be a massive rush on AR-15’s (and all other firearms related products) even before the election due to the possibility that Hillary might be elected.

2. If Hillary is elected, there will be even more buying of AR-15’s (and other firearms products) due to her clear stance on banning them, and her strong desire to take your guns (and eliminate your ability to acquire them).

3. Hillary will likely ban AR-15’s (and others), and probably its ammunition too – by decree.

4. She will appoint Supreme Justices who will crush the 2nd Amendment with a majority ‘far left’ court.

5. The overwhelming demand from those purchasing AR-15’s and other firearms products and ammunition will create shortages and ‘out-of-stock’ issues within the industry. Remember the .22 ammo problem? Magnify that by MANY times ‘across the board’.
Here are a few notes about AR-15’s, especially for those who may be apprehensive or afraid of them, or who think that this rifle is especially dangerous, especially deadly, etc..

-Just because the rifle is colored black does not mean it’s especially bad.

-The AR in ‘AR-15’ does not stand for ‘assault rifle’. It stands for ArmaLite Rifle, after the company that first developed it in the 1950’s.

-Just because they typically come with a 30-round magazine doesn’t mean that it’s more dangerous than one with say, a 10-round magazine. Why? Because a magazine can be easily swapped out in a few seconds. And, see the next point:

-The AR-15 (just like any other semi-automatic weapon) will fire one bullet per trigger pull.

-The AR-15 is NOT an automatic weapon. An automatic weapon is a ‘machine gun’ which fires bullets continuously while the trigger is pulled. Machine guns have been severely restricted from civilian ownership since 1934, and obtaining a permit to own one is an arduous time intensive and expensive process.

-Just because the AR-15 is easily accessorized does not mean that the accessories make it any more dangerous. The gun still shoots the same way regardless.

-There are ordinary hunting rifles that are much more powerful than the AR-15.

-The AR-15 is America’s most popular sporting rifle. Why? Probably because it’s like having an erector set – where you can build it and accessorize it in so many different ways… Plus they’re just fun to shoot – and not much recoil compared to some other rifles ?

-Just because a scum criminal uses an AR-15 (America’s most popular and common sporting rifle) does not mean that the AR-15 is at fault in the crime. The criminal is the fault, not the weapon that was used.

-Guns (and AR-15’s) don’t shoot by themselves. It takes a human being to pull the trigger.
I’m sure there are more things that you can add to this list (please do in the comments below).

What’s your opinion about the potential for AR-15 (and ammo) shortages coming up?

If Hillary is elected, what’s your opinion of the future of this firearm? (or any firearm)