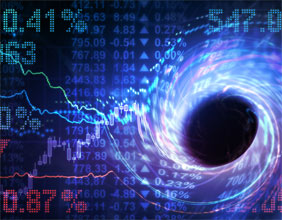 This article was written by Tyler Durden and originally published at Zero Hedge.

Editor’s Comment: It is what the middle class and poor have been feeling for nearly a decade now, it is the reality that is being held up only by corrupt monetary policies and political interests. It is the great storm which can be triggered on command, and only held off so long.

Growing comfortable to the new norm in the wake of the 2008 economic crisis will soon prove to be a dangerous position. Once the interest rates are raised, or the free money flow tightened, the hammer will drop; meanwhile, the red lines of debt are coming due with extreme consequences in both personal and state lives.

Carl Icahn Turns Apocalyptic: “I Am More Hedged Than Ever, A Day Of Reckoning Is Coming”

We profiled Carl Icahn’s notorious bearishness most recently two weeks ago when we showed that for the second quarter in a row, the billionaire’s hedge fund, Icahn Enterprises had kept on its record short bias, manifesting in a net -149% market exposure.

Unlike other hedge fund managers, however, Icahn does not provide monthly letters explaining his mindset which is why we eagerly watched a expansive, 40 minute interview he gave to Bloomberg’s Erik Shatzker, in which in addition to a detailed discussion of Trump and how the Republican presidential candidate would change the US economy, he shared some much needed insights into his gloomy vision of the market.

Below are some of the key excerpts from his discussion of the market:

Shatzker:  Why is it that the stock market is where it is?  That with valuations so high that I noticed in the letter that — or at least in a statement that you made with your son, Bret, earlier this month, that you don’t feel confident making any large investments?

ICAHN:  Aabsolutely, Erik.  I have hedges on, I’m more hedged than I ever was. I will tell you there’s certainly good companies. [The market] is way overvalued at 20 times the S&P and I’ll tell you why: a lot of it is a result of zero interest rates.  It’s just what I said. You have zero interest and a lot of buybacks. Money is not going into capital.

So think of it as a rich family that just decides “we’re just going to have a lot of fun, we’re going to sit around in the pool, and we’ll keep printing up IOUs to the town, we’ve got a good name.” You keep  doing it until you go broke.  And this is what’s happening in our economy.  Zero interest rates are building huge bubbles.  You have retirees that saved a million bucks, half a million bucks.

I think the market is at literally very high levels because of zero interest rates,and if you really look at it, the dollar is pretty strong right now, which is going to hurt international earnings.  The S&P, they live on international earnings.  That’s going to be hurt.  There’s going to be a day of reckoning here.  I’ve seen it many times in my life.  When things look good, they look great.  You go into the sky.  But that’s when you have to really pull down and really stop buying. That being said, I’m not going to tell you it’s going to happen tomorrow, next week, even next month, even next year possibly.  But it’s going to happen, and you have to change the direction of our economy.  I can’t say it plainer than that.

[T]housands of CEOs understand the problem.  They say one day, a regulatory agency, EPA, waves its wand and we’re bankrupt, or almost bankrupt.  We’re losing a fortune.  Why the hell should I invest in more capital?  Why should I invest in more machinery?  Therefore, we can’t compete, and therefore the middle class does not have manufacturing jobs and we now say, well, we’re not a manufacturer, we’re a service company

What could cause a crash:

Shatzker:  You say, Carl, that a day of reckoning will come for the stock market.  You can’t say whether it’s going to be this week, this month, even this year or next year.  Let’s talk about the factors that you believe would precipitate such a correction.  What could cause stocks to fall?

ICAHN:  Erik, I think I’ve been talking about it to you this whole interview.  One of the things that’s causing it to fall is happening right under your nose, that we have no capital spending.  Capital spending is going way down.  In a society like us, manufacturing is important.  I don’t care, sooner or later, you can’t just keep tweeting to each other.  You can’t text each other.

We say we’re a service economy, that’s great, we’re a service economy.  What does that mean?  That we text more to each other.  Sooner or later, everybody is going to send a text to each other and say isn’t that wonderful, so why should anybody work?  Just sit there and text to each other or watch TV.  So I am saying to you, this is what is happening as we speak.  Capital spending is down, obviously. The last two years, I mean, it’s just down four percent in the last quarter which is unheard of when you don’t have a recession.  OK.  Productivity has not grown.  In fact, it’s the lowest growing it’s ever been as far as growth goes.  These are very important things in a capitalistic system.  Unless you have a dictatorship, you’re going to go the way of Cuba.  Well, Cuba was a dictatorship but it still went that way.  But then you’re going to go the way of Venezuela, Argentina.  You’re going to be in a major problem.

He then turns to the economy and social turbulence, where he repeats “shocking” allegations made by Trump, namely that “unemployment numbers are not accurate”:

You see GDP is not going up, I could give you a lot of reasons.  But the most important is that the middle class worker is really, does not have good jobs.  This unemployment numbers are not accurate in one way, that a lot of these guys have left the work force, and two, these jobs aren’t paying that well.

So I am saying that the middle class – that is why you saw this uprising for Bernie Sanders and you see it for Trump and you see Brexit and you see what’s going on in Italy.  I think there’s an undercurrent of great unrest in our global economies.  This “one percent”, people resent it, and they resent government for allowing it to happen.

Last, and certainly not least, is perhaps the key issue at the bottom of everything: the US Dollar as a reserve currency, which has permitted all of the above to happen:

Now, the thing that goes for the country as you pointed out is, we’re a reserve currency.  But I don’t know how long you can depend on that.  So I am just saying that sooner or later, there’s going to be a massive problem, I think.