Surviving In and Escaping From an Urban Area 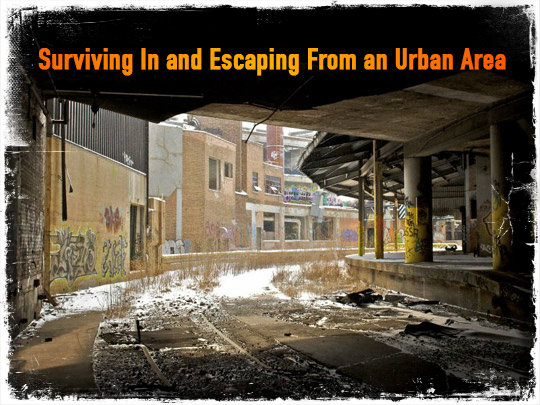 A previous article covered the fact that most people will not be able to bug-out during a crisis. Some will be able to, of course, the ones that have a vehicle hidden somewhere, have supplies cached out of town, and can literally get the jump on everyone else.

To safely get clear of a heavily populated area during a crisis means you have to be one of the first on the roads, provided they are not damaged due to the crisis. Otherwise, you and possibly hundreds of thousands of others will be trying to evacuate by vehicle creating gridlock. The last place you want to be is trapped in a vehicle on an elevated highway, in a tunnel, or on a bridge during a catastrophe with a car load of supplies that you can’t carry if you have to abandon your vehicle.

The fact that you cannot bug-out of the city does not mean you can necessarily stay in your current home, however. If you live on the upper floors of any building you are at greater risk, this is particularly true when the grid fails. You may very well have to relocate within the city during a grid down scenario, during a catastrophic natural disaster, or during an attack on the city.

Others may flee the area, and this frankly is the best case scenario for those that stay. It means less competition for resources.

If you do have to leave and it is on foot there are a few ways to do so. However, planning is crucial, so right now you should know where the train yards are. Trains need tracks and freight trains run from coast to coast. Follow the tracks of freight trains out of town. The trains will not be running, so you can use the tracks for navigation.

You may have to walk parallel to the tracks so you are not exposed on the tracks. Commuter trains will run to the suburbs or too small outlying towns, but this may be an option as well, get to the suburbs by walking the tracks and on to smaller towns a few miles away.

Depending on the crisis, hiking out using highways and roads may not be an option. The main roads and highways if not damaged will be likely gridlocked. It would not be a good idea to try and maneuver your way along a gridlocked highway on foot. The people in the cars will not be in a good mood, and here you are strolling along with a pack full of supplies, this is simply not a good idea. You can map out access roads, and waterways that lead out of town, and again know where the train tracks go if you have to leave on foot.

Tools You May Need

1.) Pick up a quality set of bolt cutters, so you can cut locks to access maintenance rooms under your apartment building and other areas within the city, for example. We will explain why this could be important later.

2.) Have a siphon for gasoline/diesel and one for water, and never use the fuel siphon for freshwater. Have several approved fuel containers, do not use plastic or glass jugs for storing or transporting any type of fuel.

3.) Hacksaw with extra blades, copper pipe cutter, adjustable wrench, Phillips, and flathead screwdrivers and several sizes of pry bars, (crowbars). Have a firefighter ax or similar tool that can be used to create an egress or to breach doors and walls along with channel locks and other types of pliers for opening drain cocks. Have a roll of duct tape as well. Have several sturdy locks, so you can secure doors and fences in which you had to cut the lock.

4.) Fire starting materials, water containers, and a sturdy metal pot for boiling water, along with common household bleach, which contains between 5 and 6 percent sodium hypochlorite without any additives, and water purification tablets.

The above is not a comprehensive list of course, but everything on the list is something you may very need as you forage in an urban environment. Forage for fuel, water and other tools and supplies you might need.

Water seeks the lowest point and once the supply is stopped to an apartment building, for example, there could be gallons of water still in the lines. Make your way to the basement and try to find the water supply lines, which will be copper or in some cases, galvanized pipe. Drain water from copper pipes, if possible and never from PVC piping. PVC is mainly used for drain lines, and not for a fresh water supply.

Look for hot water tanks, and boiler systems used to heat the building, both of which can supply you with water by simply draining the system.

This is where the bolt cutters come in handy. You may have to cut a lock off the maintenance door to access the plumbing system. Use the hacksaw to cut into copper piping at the lowest level you can find in hopes you can drain the water from the supply lines. Use the pipe cutter in tight spaces, and have a collection container at the ready. As stated before look for hot water tanks, as well, that can be drained for water.

Ground floor office buildings may have water coolers for their employees. Avoid upper-level floors if the power is out. Stairwells become ambush points, and fire is always a real possibility.

You may be able to score several 3 or 5-gallon water containers full or partially full. They will be hard to carry, but you can cache them close by before someone else figures out this could be a water supply. Use some paper or clean cloth along with the duct tape to cover the opening to prevent contamination of the water. Use the water siphon you have to draw off enough water for your immediate needs.

Other sources of water can be campers/RV with fresh water tanks. If people flee the city they may leave behind campers/RV’s which usually have fresh water tanks and some may still have water in them. Simply find the white tank under the unit and open the drain to collect the water. Any water you collect from any source should be treated before consuming to be on the safe side. Water that contains chemicals and toxins cannot be treated and made safe to drink.

Hospitals use generators, and you may be able to use one so you can set up a base camp in the basement or at the very least siphon the fuel out if they don’t use natural gas or propane. You may come upon a portable generator at some point or you may own one now, and if you have the fuel you can use the generator in a limited capacity. Think ahead for possible uses of anything you find.

Impound lots will contain vehicles that can be used as shelter or you can salvage items from them to help you survive. If you have to cut the lock off the gate, replace with your own lock if you plan to shelter inside at night. Your lock will not stop a determined person, but will act as a deterrent, and having them fumbling around cutting the lock may give you time to prepare a defense.

Salvage yards can be a good source of materials as well, but the cars in salvage yards may not be such that you could shelter in one. You may be able to siphon fuel from the cars in an impound lot to use in your vehicle, motorcycle or generator.

Any commercial building may have vending machines inside that have not been looted. Look for employee break rooms in office buildings or factories that have been abandoned. You may find water, snacks, and certain other types of non-perishable foods still in the machines. The refrigerators in break rooms may contain bottled water as well.

We will not get into the legalities of all that has been mentioned above. That will be left up to you. In a grid down scenario where many people have fled the city is a major catastrophe, which will require you to do certain things that you would not normally consider doing.