Is There Such A Thing As Having Enough Food Storage? 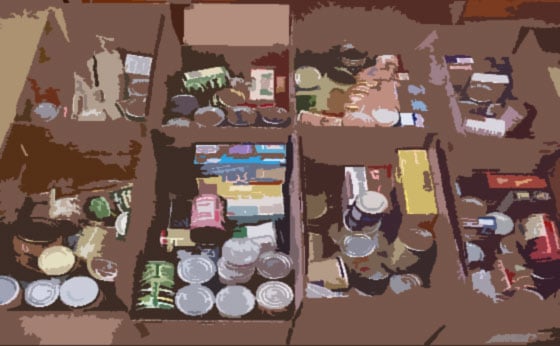 When it comes to prepping and preparedness, the first steps that most people take are to acquire extra food (a variety thereof) to store or to deepen their pantry for a time of emergency (or worse).

A household that may have normally only kept enough food on hand to last about a week (probably the typical scenario for most Americans) may have decided to boost their food storage to several or three weeks of food to feed everyone there. This amount of food storage will certainly be plenty enough for nearly all ‘typical’ emergency scenarios that may tend to occur in our lives.

So, is that enough food storage?

Sure, if you believe that the probability of something worse than a 3-week disaster is so low – that’s it’s irrelevant…

However, consider this, even if the likelihood of a long-term food shortage scenario is very low, ‘what if’ it actually happened? Sometimes that ‘outlier’ event does happen. If it does, how will your household survive it?

It’s interesting (and dangerous) how the vast, vast majority of people will completely ignore the value of having ‘food insurance’. They (we) are so accustomed to a never ending supply of food at the grocery store that it is very difficult to adjust one’s normalcy bias to accept that ‘it could’ be disrupted (or worse).

Our modern systems of infrastructure (including modern agriculture, distribution channels, and retail grocery stores) have been working for so long, that it seems impossible that it could break down.

It is absolutely remarkable to really think about it and consider how today’s urban areas where nearly 90% of people live – would cease to exist without this working infrastructure! And add to that thought process the fact that all of it is functioning on a ‘just in time’ system of delivery – finely tuned for optimal profits.

Millions upon millions upon millions of people NEVER think about the ‘what if’ scenarios whereby their food may no longer be available at their grocery store, their restaurants, or their local deli or corner store. The hard cold fact is that they, along with millions of their neighbors, will simply die if and when a terrible break down occurs. It may be an ‘outlier’ event, but ‘if’ it happens, is it worth your life? Don’t you want insurance for this? Food insurance?

Okay, lets get back to the question at hand… “Is there such a thing as having enough food storage?”

How far does one take the outlier SHTF scenario?

Here are my own current recommendations for ‘food insurance’ goals along the way:

Three weeks of food storage is ridiculously easy to acquire. Even the so called ‘poor’ should be able to manage this acquisition is relatively short order. This will cover nearly every ‘typical’ emergency / disruption that may occur.

Three months of food storage is still not that difficult to acquire when you put your mind to it. This amount of food will ensure that you can feed your household for a greater disruption – albeit less likely to occur.

One year of food storage is a tremendous insurance value. A very small percentage of people will reach this level of ‘deep pantry’ – mostly because they don’t think they’ll ever need it. The thing is though, if you truly rotate your food (which means actually consuming it – oldest first), it essentially becomes your own grocery store – your own food bank. The price of food rarely goes down, so it also has saved you money over the long run.

A three year supply of food storage is an amount of food that will ‘buy’ you time from a self-sufficiency point of view. This is an amount of food that presumes a major collapse to the extent that only the self-sufficient will survive (mostly) and three years provides time for your garden (gardens) to establish and produce. A garden can be wiped out by a number of natural factors, and if during your first year you lose it – then you will run out of food. Again, this amount of food storage is tremendous and very few of even the most avid preppers will have acquired this much. But it truly is the ultimate insurance package if you are considering an ‘end of the world’ collapse…

Note: We did a prepper poll about a year ago which asked how much food storage that you have to feed your household. 8% of you had two years or more (that’s just shy of about 1 out of 10 preppers). I’m certainly not ‘picking on anyone’ if you don’t have that much! That is a big accomplishment – and takes determination, time, and money (and space to store it). Most of the rest were evenly split between 1-3 months, 3-6 months, and 6-12 months.

Related: This book may help: The Encyclopedia of Country Living
So there you have it… Is it ever enough? ?