In this article we will discuss the most prominent threats preppers face in 2017.  Every other year we release this updated article utilizing 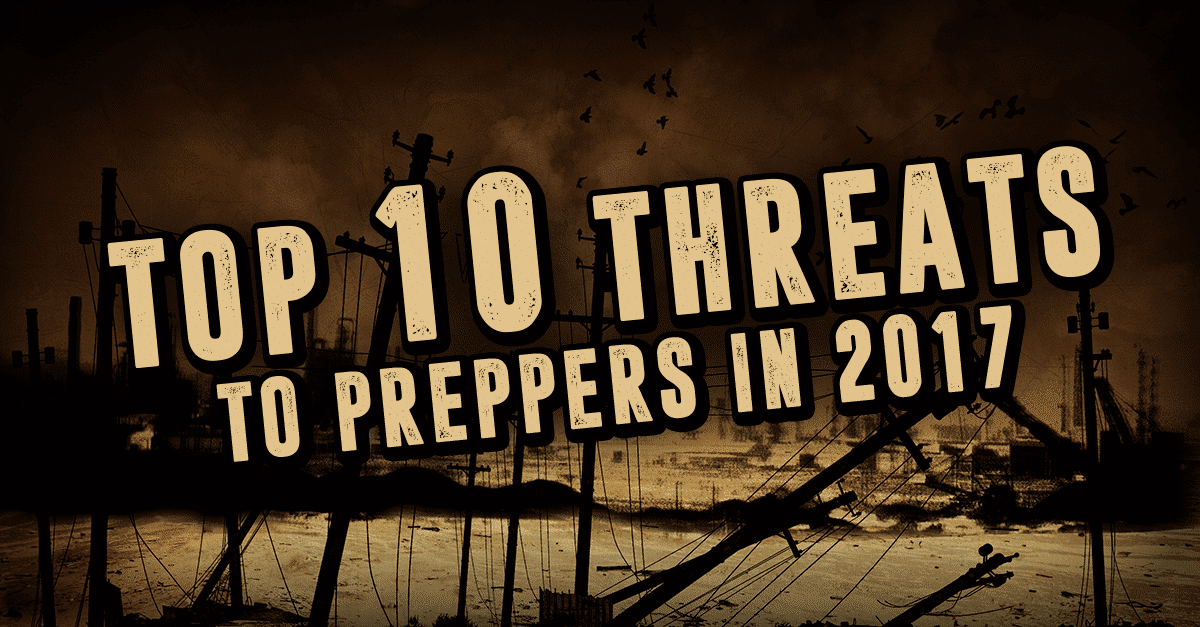 current events, natural patterns, and rational logic to accurately gaze into our crystal doomsday ball.  Unlike the majority of survival and preparedness sites, we will not make random divinations with farcical claims aimed at frightening readers into sharing our posts.  We will not do that.  At usCrow.org our credibility hinges on our ability to write knowledgeable and rational pieces our readers trust.  I usually don’t write such self-indulging preamble, but my intention is for you to understand the threats listed in this article should be taken seriously.   If you’re a seasoned prepper it’s not likely the threats listed here are anything new to you, but the circumstances increasing their likelihood have definitely changed forcing us to reprioritize.

If you’re spending thousands of dollars on gear, food stores, firearms, ammunition and etc. preparing for an alien invasion of reptilian lizard men from Gliese 667Cc, you’re likely to be thoroughly disappointed with an actual doomsday event.  But hey, at least you got thirty MREs you can woof down. That’s the problem, when you have people calling themselves ‘preppers’ espousing these bombastic theories it turns everyone else away from very real threats that every man, woman, and child in this country could face.  You don’t need all that nonsense!  Life on Earth is a game of Jenga, and it takes one thing out of balance to totally fuck everything up.

Don’t get stuck on extinction events, focus on reality.  An extinction event is a widespread decrease in life on our planet, and there have been at least five mass extinction events that have occurred on Earth.  The most recent was the Cretaceous—Paleogene Extinction Event that killed almost every living creature around 66 million years ago.  If you turn on The History Channel, there will always be some random jackass saying ‘Well the last extinction event was sixty-six million years ago and we’re due for another one…’ which is a fine example of faux scientists spreading irrational fear, shifting people’s attention from the real survival threats to silly theories.  Now let’s focus on reality!

Back in 2012 everyone had economic collapse at the top of their list forcing them to buy precious metals and goods at a higher price.  Gold for instance was being bought by the bucket by preppers, and survival minded folk for around $1,735.00 per ounce.  That same ounce of gold is worth $1,250 per ounce today meaning a lot of people lost a lot of money on their investments. There will always be claims of an eminent Economic Collapse.  Does that mean it won’t?  Absolutely not, economic collapse is on this list for a reason.  Things have gotten worse though.  After an eight year stretch of the most corrupt, and irresponsible President America has ever seen the damage has been done.

Under the Obama Administration; Inflation statistics that point to a collapse have been hidden from the public, American wages have fallen drastically, 33% of the population have absolutely no spare money with the other 46% of the population only have money to cover their cost of living for a maximum of 90 days, Global GDP is sluggish and refuses to bounce back, U.S. reliance on foreign sales in the face of likely tariffs to further degrade consumer spending, and we are months away from being twenty trillion dollars in debt with no signs of getting our national debt under control!  Here’s the rub, our economy is not doing well at all, and we will be on the cusp of collapse for quite some time. If Economic Collapse ranks #1 on your list, instead of focusing on material goods start focusing on self-sustained (off grid) living fueled by a debt-free lifestyle!

ISIS (Islamic State of Iraq and Syria) — I am so sick and tired of these goat fuckers but they deserve a place on here strictly because of who is running our government.  If real Americans who gave a damn about The Constitution, and preserving our way of life were running the government ISIS and its operatives wouldn’t have a chance in hell of making it inside the US.  That’s the problem though, we don’t.  Our government is run by the most traitorous scum to have ever walked the planet.  Obama has shown his true colors while singlehandedly causing (by design) the rise of ISIS, and radical Islam throughout The Middle East.  This was his goal since the beginning.

Since Obama has been in office there have been seven attacks in America each resulting in mass casualties.  If you want my honest opinion I think they are here, they are ready to attack on a national level, and are waiting for the command.  There has never been a more prime time to attack America than now  with radical Islamic sympathizers making up majority of ‘shot callers’ in this administration like Arif Alikhan, assistant secretary of Homeland Security for policy development; Mohammed Elibiary, a member of the Homeland Security Advisory Council; Rashad Hussain, the U.S. special envoy to the Organization of the Islamic Conference; Salam al-Marayati, co-founder of the Muslim Public Affairs Council (MPAC); Imam Mohamed Magid, president of the Islamic Society of North America (ISNA); and Eboo Patel, a member of President Obama’s Advisory Council on Faith-Based Neighborhood Partnerships.  We are ripe for attack…

Viral Pandemic Preparedness always holds a key position in my preparedness planning since it can happen at any moment, and with little to no warning at all.  Hell, preparing for a viral pandemic is probably one of the most rational things you can prepare for when you consider in only 64 years (1940 — 2004) over 335 new infectious diseases appeared in humans.  Just recently we had a major incident that had the entire world scared shitless when the Ebola Virus claimed 11,315+ lives in Liberia, Sierra Leone, Guinea, and Nigeria!  For a while there it looked like it wasn’t going to stop until the WHO (World Health Organization) finally got the situation under control.

Not only did we have to deal with Ebola, but we also had; Reston virus, Zaire virus, Sudan virus, Bundibugyo virus and the most recent Zika Virus.  Viruses are continuously evolving into more efficient engines of death, and all it takes is one minor mutation in the genetic makeup of a virus like Ebola, and just like that the world dies.  In fact, this possibility was so frightening many of our readers sent in requests for us to write an article about it.  Read Prepare for an Airborne Ebola Outbreak.

Remember when I said our world is a Jenga tower, where one misbalanced piece pulled out of the structure ruin the whole thing?  Well, the animals that live on our planet play a major role in maintaining a sustainable balance.  Unfortunately, we are seeing two of our most important creatures being pulled from the structure.  Bees, our primary pollinators are massively suffering from CCD (Colony Collapse Disorder), and Bats a secondary pollinator are dying at alarming rates from White-Nose Syndrome.  These are our two primary pollinators, and they’re dying off faster than they breed!

In case you weren’t paying attention in class, without pollinators over a third of our food will be gone.  We can barely handle the load as it is; can you imagine how bad things will get when we can’t feed over two billion people?  Food prices will rise, the mortality rate will increase, and bodies will line the street leading to new infectious diseases, cannibalism, civil unrest, economic collapse, and JENGA!

Look, I’ll be completely honest with you guys.  I’m not necessarily on the solar flare bandwagon.  Surely if they were more dangerous they’d be closer to #1, but as things are they haven’t been proven to cause catastrophic damage to human life on Earth.  Their frequency, and ‘as is’ effects lands them #6 on the 2017 threat list.  Now before you get all spastic on me hear me out.  The most recent incident where we were able to prove a solar flare had a physical (not electromagnetic) effect on the surface of the planet was Finland in 775.

Sometimes our star only pops off a single solar flare a week, while other times it sends off several each day.  At this point it’s a theoretical issue that requires an extreme coronal mass ejection aimed perfectly in our direction with close to a hundred thousand light years of space around us.  The electromagnetic effect is what I’d be concerned about!

Want to know the big joke of our alleged ‘secure nation’ where we’ve given up many of our liberties for that alleged security?  The one thing that would make this nation cannibalize itself, power, is the one thing that is at risk the most.  Never mind the EPA (Environmental Protection Agency) wanting to shut down coal and natural gas power plants our primary power source with solar and wind power that’ll put more stress on the grid.  What we all need to worry about is our substations have minimal security, and if terrorists were so inclined they could hit a few key substations in each state that would cause a cascading power failure…

“Consider the massive 2003 blackout that left some 50 million people across North America without power for up to four days. Officials said the outage, caused when a sagging power line came into contact with overgrown trees, cost an estimated $6 billion and contributed to 11 deaths. The damage caused by a sophisticated cyberattack could be much worse.” — Ernst & Young LLP

A CBRN Event is an incident where a chemical, biological, radiological, or nuclear weapon has been detonated.  You may not know this, but it is a common belief throughout anti-terrorism units that The Holy Grail for terrorists is obtaining a CBRN weapon.  These guys are dying to get their hands on anthrax, plutonium, smallpox, and anything else to inflict as much damage as possible.  Luckily the intelligence community has a pretty close eye on this stuff, making the product extremely expensive.

The CBRN threat became more prominent in 2016-2017 after eight years of having a radical Islamist pussy in charge of the country our enemies were emboldened with N. Korea and Iran getting much closer to obtaining nuclear ICBMs (intercontinental ballistic missiles), and other nuclear materials that they will surely start selling to smaller terrorist cells.

I’ve been listening to a few conservative talk show radio hosts who’ve been throwing out some interesting theories.  Theory is as Obama is exiting The White House he will start implementing his final phase of American Destruction, mass shooting here, civil unrest there, bombing here, assassination attempt there, and then a slew of unconstitutional laws or executive orders will be signed.   These ‘laws’ will call for the seizure of weapons under the UN Arms Trade Treaty, the DOJ will target militias for detainment, and then shit will royally hit the fan giving them an excuse to institute martial law…

We are definitely in the dawn of geological disasters, and for good reason!  Super volcanoes and major fault lines have been popping off lately.  We are way overdue for a super volcano to erupt (they’re every 50,000 years) and is twelve times more likely to happen than an asteroid hitting Earth.  If a super volcano goes off sulfuric gases, ash, and debris will be launched into our atmosphere blotting out the sun for years killing off the majority of our vegetation, and animal life.

The big one, the big one, the big one!  It’s the only thing you hear Californians talk about, but you still don’t see them moving, right?  Either they’re too high to take their own advice or everyone has just accepted it.  California was due for this quake decades ago, it’s inevitable at this point.  If you’re wondering how that’ll turn out just watch San Andreas, pretty accurate.