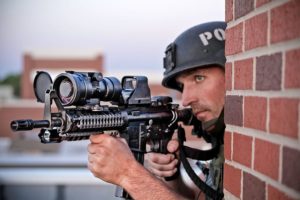 The MilSight™ T90 Tactical Night Sight™ (TaNS™) is a high resolution Clip-On Night Vision Weapon Sight with a versatile and portable design. Little brother to the AN/PVS-22, it can mount in front of any boresighted daytime scope with magnification ranging from one to eight power. The TaNS™ does not require any boresighting and once mounted the daysight provides the aiming point. The TaNS™ maintains boresight despite normal misalignments due to mount position errors and does not alter the sighting centerline (parallax is unchanged from dayscope).

The TaNS™ also contains no beam splitter or folded optics to go out of alignment. The TaNS™ is revolutionary when used with a high magnification fixed or variable power dayscope. The magnification is provided by the dayscope, which typically has much smaller optics than those associated with normal 4X or 6X night vision weaponsights. This means there is no loss in system gain or typical f/number loss associated with large optics. Optimized for medium and long-range sniper weapons including the SR-25/MK11, XM107, .338 Lapua, .308 M24, Chandler & 300 Win Mag. Effective on all weaponsfrom carbines to .50 caliber semi-automatic and bolt action sniper rifles.

The TaNS™ includes FLIR’s proprietary Shock Mitigation System™ (SMS™), allowing the unit to be used on weapons up to and including .50 caliber bolt-action rifles. The TANS™ is manufactured with the highest quality MIL SPEC Gen III Pinnacle, American Made Image Intensifiers.