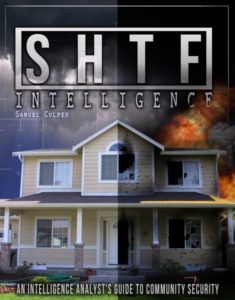 I highly recommend this book, it in my opinion is an essential for the serious prepper.  Robert E. Griswold, Owner Ready Made Resources.

“The most important money you can spend in your efforts to keep your family alive.” – Concerned America of Western Rifle Shooters Association

– How to Analyze Incoming Intelligence Information

SHTF Intelligence is filled with the how-to’s of building and running an intelligence section for community security.  The ability to gather and utilize critical intelligence information and provide early warning is what separates you from your peers and adversaries.  If you don’t have threat intelligence before SHTF, and no way to get it during SHTF, then you’re going to be screwed.  You’re going to be stressed and probably scared because you won’t know what’s going on.

I know what that feels like first-hand because the Taliban once breached our perimeter on my second tour in Afghanistan.  They were able to cut a hole through the fence one night and get in because someone was asleep on tower duty and all our eyes and ears were focused outside the wire to prevent an attack inside it.  It doesn’t feel good.

I imagine many Americans are going to have similar feelings during any number of possible SHTF events, but they’re going to be a lot less prepared than we were.

If you’re spending hundreds or thousands of dollars on ‘stuff’ but not spending any time on some basic intelligence work, then you don’t know what threats exist.  If you don’t know the threat, then you can’t defend against it.  Don’t put yourself or your family in the situation of not knowing what threats exist in your area.  Do a little leg work now so that you know what events to prepare for.

“The most important money you can spend in your efforts to keep your family alive.” – Concerned American of Western Rifle Shooters Association

“I am reading the ebook now. It is so good! It is already shaping our group planning and [intelligence preparation of the community]. Spectacular job sir!”  – David D.

Samuel Culper is a former Army and contract intelligence analyst who spent three years in Iraq and Afghanistan.  He’s written this book to help transfer the knowledge of Intelligence Operations to the Patriot and Prepper communities.